BOZEMAN – Two men from out of state who claimed to be visiting a friend in Bozeman are facing multiple felony charges after police found them in possession of more than a pound of methamphetamine, a large amount of cash, and a loaded handgun on Friday.

Luis Alberto Garcia and Eric Jasper LeBeau appeared in Gallatin County Justice Court on Monday. Bail for each was set at $1 million.

According to court documents, around 8:20 a.m. Friday, a Montana Highway Patrol trooper stopped a woman driving a pickup truck, with two men in the bed, on Jackrabbit Lane in Belgrade. The trooper said he made the stop out of concern for the safety of the two men riding in the bed of the vehicle.

The woman said she was giving the men a ride from the Town Pump in Four Corners to the Quality Inn in Belgrade. Court documents state the trooper spoke with the two men, who gave their names and dates of birth. The trooper said a criminal history check revealed multiple drug charges for both Garcia and LeBeau, including felonies. 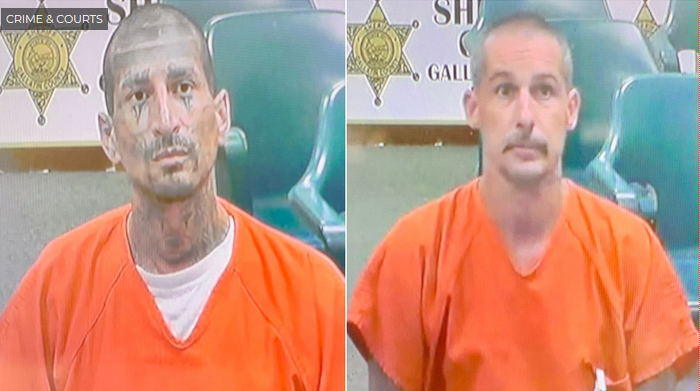 The trooper said he noticed two backpacks in the bed of the truck, which the driver said belonged to the men. The trooper asked both Garcia and LeBeau where they were coming from, according to court documents, and they reportedly gave conflicting answers, which made the trooper suspicious of criminal activity.

Garcia and LeBeau were handcuffed and placed in a patrol car and allegedly denied consent to have the backpacks searched. The trooper called in a Gallatin County Sheriff’s Office Sergeant to conduct a canine search of the backpacks, which reportedly indicated the presence of narcotics.

The trooper seized the backpacks and released the two men. They were later apprehended at the Quality Inn in Belgrade, suspected in a hit-and-run crash from the night before in Yellowstone National Park.

The trooper said in court documents U.S. Attorney’s Office in Wyoming, working with the Yellowstone National Park Service, had issued warrants for Garcia and LeBeau.

After both men were transported to the Gallatin County Detention Center, the trooper applied for and was granted a search warrant for the backpacks.

In court on Monday, prosecutors said both men have multiple convictions in multiple states, ranging from gun felonies to possessing and distributing dangerous drugs, including meth. Garcia is also reported to have a history of escaping custody, as well as probation and parole violations.