HELENA – The West Mont Flower and Trading Co. delivery vehicle that was first reported stolen on Monday has been recovered with no serious damage.

The vehicle was returned in pretty good condition, but there was damage to the bumper and someone had attempted to remove one of the decals.

Staff says they’re incredibly thankful for the police work and the huge community support they receive when trying to locate the SUV. 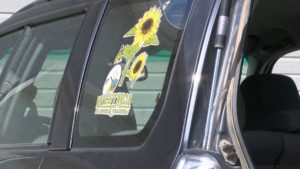 “It was amazing how many people came out and supported us in attempting to find the vehicle,” said Farrell. “Not everybody gets to live in a community like this and I guess that’s why we all live here. It was pretty special.”

The non-profit uses the vehicle to not only deliver flowers but also get their clients with developmental disabilities out and interacting in the community.

Farrell says in response to the theft, a community member has offered to donate their 1991 Chevy Suburban to the flower shop.

The Helena Police Department said the case is still under investigation and anyone with information about the theft should contact them by calling 406-447-8461.

People can also leave a tip anonymously through Crimestoppers by calling 406-443-2000.