Fire evacuation routes improved in the greater Helena area, but more work to be done

Over the past couple months crews have been removing vegetation in the jurisdictions of the Wolf Creek, Montana City, Tri-Lakes and Baxendale fire departments along evacuation routes.

Funding for the projects were made possible through the “Ready, Set, Go!” (RSG) program.
Managed by the International Association of Fire Chiefs, the program aims to develop and improve the dialogue between fire departments and the residents they serve.

Fire Safe say the 2017 Holmes Gulch Fire was an eye opener for many residents. The fire was started by lightning at the end of August, quickly torched 110 acres and prompted evacuations.

“The residents took that warning, looked at the fuel hazard in the area and got onboard to do something about that fuel hazard” said Pat McKelvey with Tri-County Fire Safe Working Group. Lyn Stimpson, Montana City Fire

Chief said the mitigation in Holmes Gulch and other like it ultimately protects both the homeowners in the area and the crews coming in to combat a fire.

“When we clean up these evacuation routes, homeowners are going out but we’re coming in,” said Stimpson,

“And yes when we’re headed in seeing something like this [properly managed] you feel a lot better than something that’s choked with vegetation.” 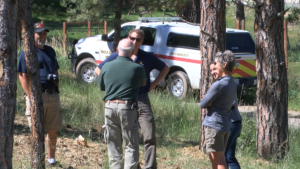 McKelvey stressed this type of work doesn’t mean they’re going in a cutting down the entire forest.

“This isn’t a clear cut,” said McKelvey. “We take the latter fuels out and look at that understory to make it safe to drive through here, and for the fire departments themselves. The fire guys need to get in to do their work and we don’t need the two of them coming together in a fire storm somewhere.”

Tri-County Fire Safe Working Group say the completed projects are a big help for those areas, but there are many roads that still need that kind of work done.

The main hurdle the fire districts face is just not having enough funding to get the work done.

This year’s RSG grants provided 90% of the cost with a 10% match required by the homeowner or fire district. Volunteer fire departments are often stretching every dollar they have just to keep their vehicles operating.
Another issue fire management crews face is weather. Heavy snow pack from a brutal winter can make it almost impossible to even access the areas that need work.

Fire officials say there’s no easy solution to mitigating an entire fire district, but there are steps homeowners can take themselves.

Taking a look at what work needs to be done on a person’s property to mitigate a fire is always a good first step.
Reaching out to your neighbors about evacuation routes where you live is also a good idea.

Once you start seeing smoke though, it’s often too late to do mitigation work.

More information about the Tri-County Fire Safe Working Group can be found here.