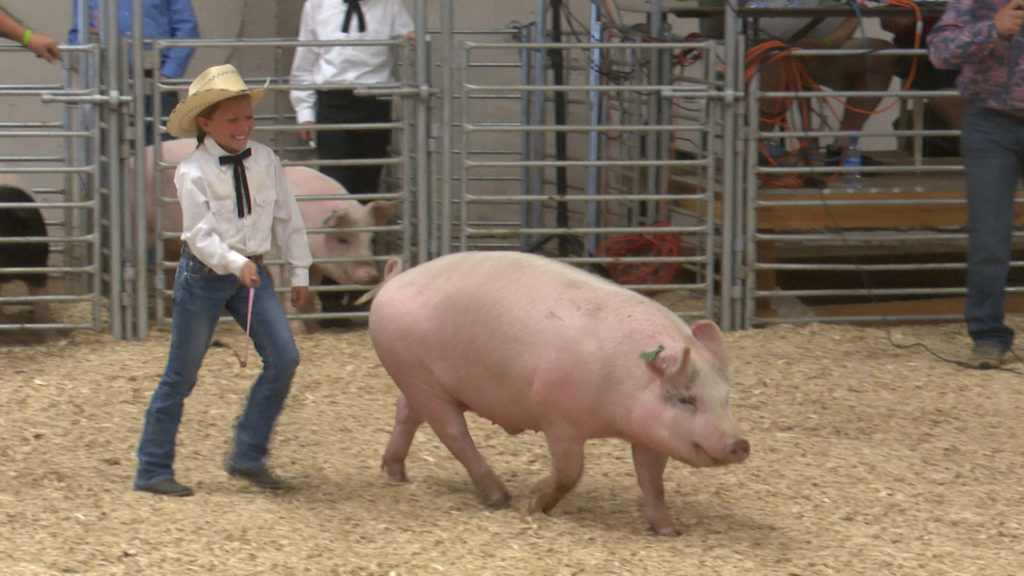 (HELENA) After months of hard work, 4-H members in the Helena area showed off and sold the animals they’ve raised at their annual livestock auction.

They brought their animals into the show ring Saturday morning at the Last Chance Stampede and Fair. Hundreds of people were in attendance to watch – and possibly bid, on everything from pigs and sheep, to steers, to rabbits and chickens.

About 200 animals were put on sale this year. 4-H members spent months getting them ready for this day.

Justin Patten started working with a 700-pound Red Angus steer back in November. Since then, it had grown to more than 1,400 pounds. Dealing with an animal of that size has its challenges.

“Since they’re larger than you, if they decide to go somewhere, they’ll go somewhere,” Patten said. “You just have to be persistent.”

Hannah Diehl brought in an 1,150-pound Black Angus steer she had been raising since December. She said the most important thing is to start working with them early.

“They grow pretty fast,” she said. “It sometimes gets harder to train them once they get bigger.”

On auction day, the 4-H members put in more work, washing and brushing their animals to get them looking show-ready. It’s an exciting day, but a bittersweet one.

“It’s exciting that I made it throughout 4-H, but it’s also kind of a depressing day because that means he’s sold and he’s not going to be here anymore,” Diehl said. “It’s kind of a mixed feeling.”

“That’s the hardest part of letting them go: You’ve built a bond with them, and it’s always sad to see them go,” said Patten.

Both Patten and Diehl are recent high school graduates, so this was the culmination of their last year in 4-H. They said they were grateful for all they learned going through the program.

“You get the chance of raising livestock and seeing them grow, and you grow in your experience and knowledge of the livestock and how to show them,” Patten said.

“When I was younger, I was extremely shy and I didn’t talk, I didn’t want to be around anybody,” said Diehl. “I think I’ve just grown a lot more from that, just because of 4-H.”