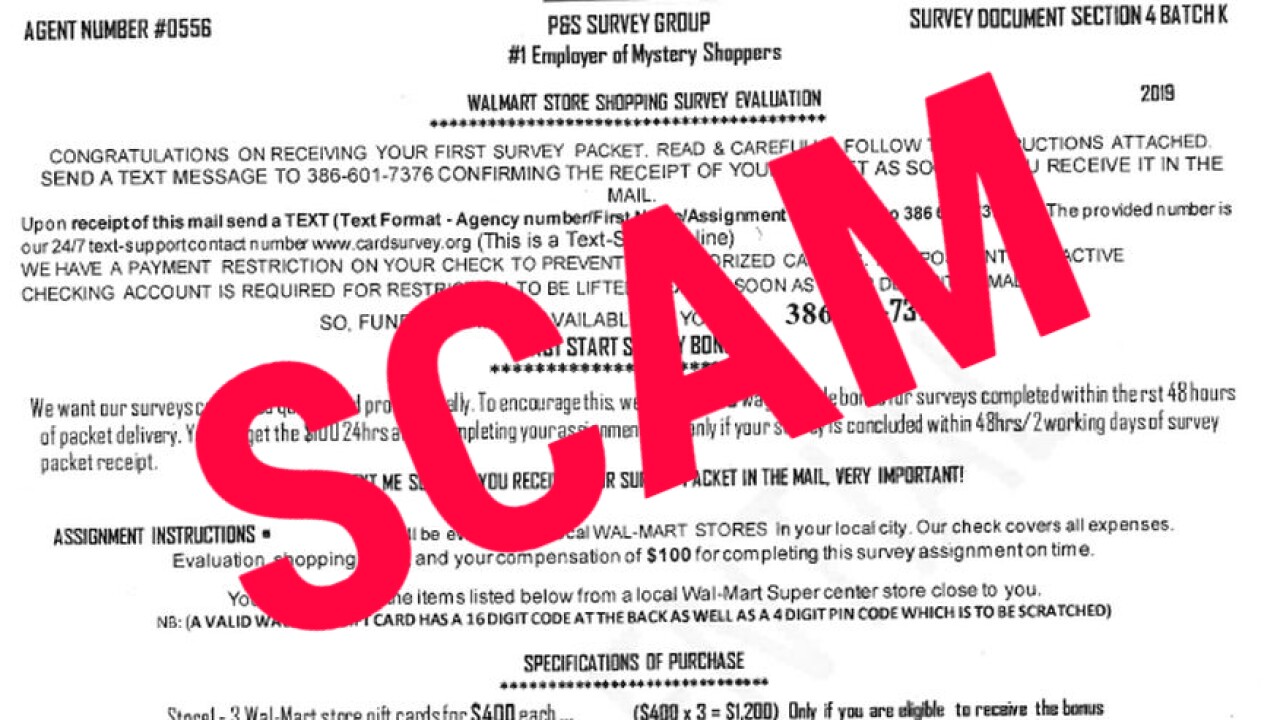 The Great Falls Police Department is warning of a scam that targets people who are trying to earn money by becoming a "secret shopper."

The GFPD said in a Facebook post that a Great Falls resident was scammed recently, and they are sharing her experience to help prevent more people from falling victim.

The victim used several online sites (linkedin, myjobhelper, etc.) looking for job opportunities. On October 15, the scam victim visited a site and clicked on a job posting for "secret shoppers" at Walmart. Once at the website, the victim did not pay close attention to the website or the URL in the address bar.

On Friday, October 25, the victim received an email with her secret shopper number and instructions to wait for a USPS package containing further information. Later that day, the victim received a USPS Priority Mail envelope containing the attached letter and a check made out to her in the amount of $2,350. The victim cashed the check at her bank and went to Walmart to buy several gift cards, as instructed.

After buying five gift cards, the victim revealed the PIN, took a photo with her phone, and emailed the photos to the listed address (paulnewt005@gmail.com), just as the letter instructed her to do

On Sunday, the victim became suspicious and found that all five cards now had a zero balance - and realized that the $2,350 check would bounce on Monday.

The GFPD offered the following advice to prevent falling for scams like this:

🚓 Note – the USPS package arrived on Friday, to ensure the check would not be processed until Monday

🚓 Always pay attention to the URL and website info, if it doesn’t look legit it likely isn’t
🚓 A legit employer will not ask about bank accounts during the application process
🚓 If you are ever asked to deposit someone else's money (and) then buy gift cards…don’t
🚓 If you are ever asked to photograph gift cards and send the photos…don’t
🚓 Be leery of email addresses that do not end with a company name
🚓 If you are suspicious about depositing a check, wait until the bank is open and ask them to verify the funds
🚓 Take the extra step to do an online search of phone numbers or email addresses. Lt. Black ran the phone number through Google and immediately got this return https://www.scamguard.com/expresssurveyorg/
🚓 If you have even one moment of doubt, a bad gut feeling, or someone who cares about you says to stop, listen! If it sounds too good to be true it likely is.

Scam Letter
Copyright 2019 Scripps Media, Inc. All rights reserved. This material may not be published, broadcast, rewritten, or redistributed.