GREAT FALLS – William Arocha, Jr., was sentenced on Wednesday for the 2017 stabbing death of Shane LaPlant.

A jury in May 2018 found Arocha guilty of voluntary manslaughter for the death of LaPlant.

Arocha was sentenced to 56 months in federal prison; he is scheduled to serve his time at a facility in Colorado.

After he is released from prison, Arocha will be on supervised release for two years. He was also ordered to pay $4,271 in restitution.

Arocha was charged for the July 5th, 2017, stabbing death in East Glacier.

During the trial, the prosecution showed a recorded interview between Arocha and special agent Steven Red Cloud of the federal Bureau of Indian Affairs.

In the video, Arocha told Red Cloud he stabbed LaPlant once and LaPlant turned to leave. Arocha then went after LaPlant, and was on top of LaPlant when he stabbed him 25 more times.

Arocha took the stand and said he does not recall a lot of what happened that night. He said his statements have changed over the last ten months because he is scared he would never see his family again.

During closing arguments, the prosecution said that this case does not come down to “heat of passion.”

They say Arocha chased down LaPlant and stabbed him numerous times, showing premeditation. 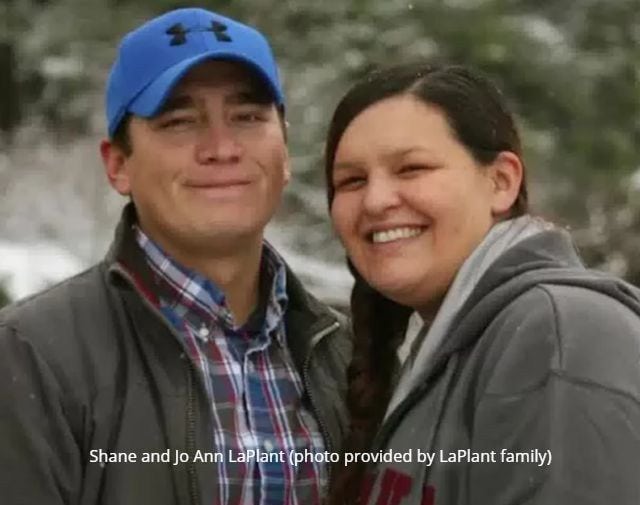 On July 4, 2017, the defendant’s father, William Arocha, Sr., got married in East Glacier Park, Montana. A wedding reception followed that carried into the early morning hours of July 5th. The victim, S.L., had been drinking and playing with fireworks nearby. Sometime after midnight, but before 3 am, S.L. decided to borrow a friend’s four-wheeler and he drove to the area where the wedding reception was taking place. S.L. was not an invited guest, but he stayed at the party and mingled with some of the invited guests.

During his stay at the reception, S.L. wore out his welcome with his behavior and engaged in a verbal altercation with some of the guests. Thereafter, a scuffle broke out when S.L. tried to take some alcohol from the party without permission. A fistfight ensued.

The initial fight occurred between S.L., Arocha, Sr., and the defendant’s brother, Anthony. The three individuals squared-off in the street outside the home where the reception took place. Arocha, Sr., and Anthony threw punches at S.L. and S.L. threw punches at them. During the fight, the defendant intervened by stepping into the fray and attempting to break the fight up. S.L. then engaged the defendant and the fight turned into a three on one – S.L. versus the three Arochas.

During the three-on-one fight, the defendant pulled a knife out of his right pocket and unfolded the blade. He subsequently grabbed S.L. with his left hand, and threw an “uppercut” with the knife in his right hand, stabbing S.L. one time in the upper torso. The defendant knew he stabbed S.L. because he felt S.L.’s blood on his hand. It took a moment for S.L. to realize he had been stabbed, but once he did, he disengaged from the fight and ran from the street into a grassy field nearby.

The defendant chased S.L. into the field, knocked him down, mounted him, and stabbed him approximately 25 more times before Anthony pulled him off S.L. There were several bystanders and someone called the police. The defendant left the scene before the police arrived. He discarded the knife and hid in a field approximately ¼ mile from the scene of the stabbing.

Local law enforcement officers from the Blackfeet Law Enforcement Service (BLES) and the Glacier County Sheriff’s Office arrived on the scene at approximately 3:10 a.m. They observed S.L. lying in the grass on his left side, and bleeding severely from several lacerations and puncture wounds on his body. EMS responded to the scene and transported S.L. to the hospital.

S.L. arrived at approximately 3:47 a.m. and was treated for multiple stab wounds. S.L. was initially stabilized and prepared for emergency transport to Benefis Hospital in Great Falls, Montana. However, at approximately 5:30 a.m., and prior to transport, S.L. lost vital signs. At 6:10 a.m., S.L. was pronounced dead at the Indian Health Services Hospital in Browning.