Highway 12 East reopened after burn gets out of control

UPDATE 09/11/2018: Broadwater County Disaster and Emergency Services says a fire that shut down a portion of Highway 12 Monday burned between 250 to 450 acres outside of the controlled burn area.

Emergency crews shut down Highway 12 East of Townsend between mile markers seven and nine around 9:30 p.m. It was reopened around 4:30 a.m.

Officials say no structures burned and no one was injured.

Fire crews from Townsend, Duck Creek, Winston, Radersberg, Toston, the DNRC, and the Forest Service assisted with the fire 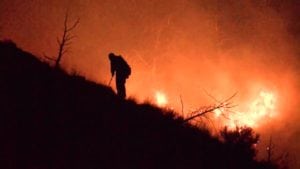 HELENA – A private burn has grown out of control at Highway 12, around mile marker seven.

Broadwater County Sheriff Wynn Meehan says a farmer was conducting a prescribed burn, when winds picked up, carrying the flames outside the fire line.

As of Monday night at 10:00 p.m., the Sheriff estimates the fire to be hundreds, if not a thousand acres in size.

Houses are in both directions of the fire and residents have been notified they may have to leave.

Everyone is advised to avoid the area, and the highway is shut down in the area, allowing only limited traffic.