(HELENA) Leaders of the agencies tasked with fighting wildfires in Montana say they’re prepared for the start of the fire season.

On Friday morning, Gov. Steve Bullock hosted state, federal and local officials in Helena, for an annual briefing on Montana’s wildfire outlook and readiness. He said it’s important to get all the organizations together and make sure they are on the same page.

“No wildland fire agency can do it on its own, can succeed on its own,” said Bullock. 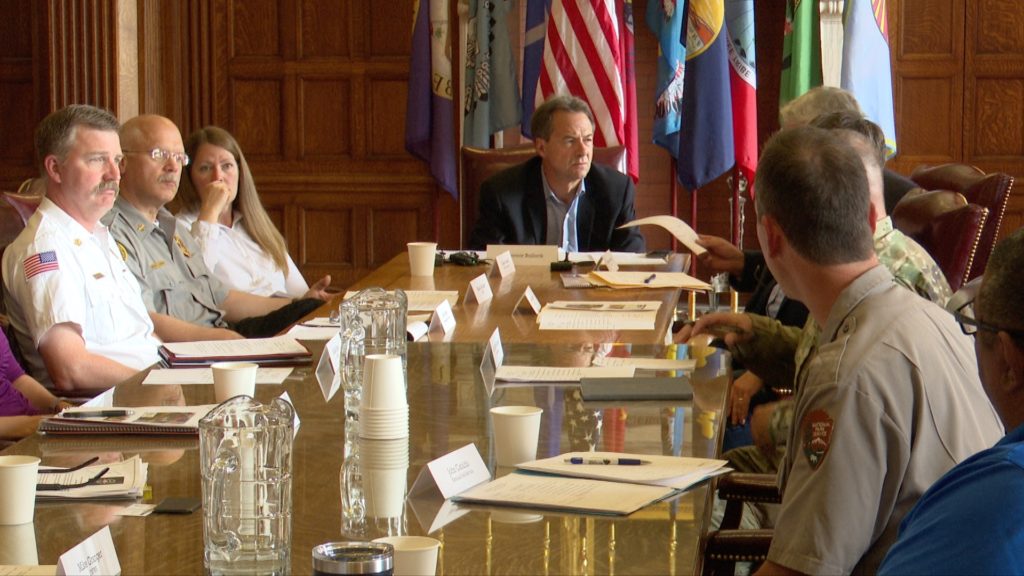 Coleen Haskell, a meteorologist with the Northern Rockies Coordination Center, said grass and other fuels are beginning to dry out in several parts of the state, especially northwest Montana, southwest Montana and around the Canadian border. She said they are predicting a near-normal “wildfire potential” across the state this summer – except in northwest Montana, where the weather has been much drier and the fire danger will be higher.

But DNRC fire protection bureau chief Mike DeGrosky noted a “normal” fire risk doesn’t mean the state has nothing to worry about.

“A normal fire season in Montana means hundreds of wildfires, burning tens – if not hundreds – of thousands of acres, costing taxpayers millions of dollars,” he said. “Whether it’s a normal fire season or not, we need to remind folks that the citizens and the visitors need to be vigilant.”

What actually happens during fire season will still depend on what kind of weather Montana gets in June and July. In 2017, leaders were expecting a quieter fire season, until weeks of hot temperatures and little rain in the summer. It went on to be one of the state’s most destructive fire seasons.

Last year, it was projected to be a particularly dangerous fire season. But while the summer was abnormally dry, Montana saw fewer lightning strikes that started fires.

“It all boils down to what we didn’t get last year, and that was lightning,” said Haskell.

“This is more about preparedness than predictions,” he said.

Montana DNRC Director John Tubbs said the agency has hired and trained 150 seasonal firefighters for the summer. They have also provided wildland training for another 3,000 firefighters from local departments. DNRC helicopters are deploying to Missoula, Kalispell and Helena.

“We’ve met the preparedness level that we need to meet every year,” Tubbs said. “We’ve got a great team of seasonals this year, so we’re feeling good.”

But Tubbs also said, as average fire seasons get longer and extend farther into the fall, it is getting more difficult to recruit seasonal firefighters, especially college students.

“We’re going to have to go to legislators, governors and the president and say, ‘This is more of a full-time job than in the past,’” he said. “We’re going to have to resource it – and it doesn’t mean spending less. It means actually figuring out that we have to spend the dollars to have the people ready to do our job.”

Regardless of what the fire outlook says, Tubbs said it’s vital that people take steps to avoid starting fires – like being careful with campfires, combustion engines and other potential sparks in the wildlands.

“The good news is I think people are listening,” he said. “We can’t control when the lightning hits, but we can certainly ask people to be safe when they’re in the woods.”

Bullock said, as of July 1, Montana will have about $38 million in the state fire fund. He said leaders can access another $16 million from a state emergency fund if it’s needed.