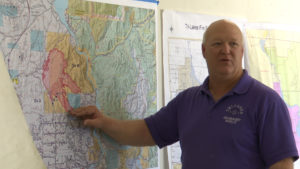 HELENA-Firefighters say they are starting to make progress against the North Hills Fire, burning north of Helena, however, the weather continues to create concerns.

At a briefing on Sunday, authorities say winds overnight pushed the fire toward homes.

The winds though were not as strong as expected, and that gave firefighters a chance to fight the fire aggressively at the edges of residential areas. They say no structures have been lost as of Sunday afternoon.

Leaders are working to strengthen the protective lines around neighborhoods. All previous evacuations remain in place for several hundred homes. Law enforcement officers estimate at least 300 homes have been evacuated as of Sunday.

At around 4:00 p.m. Sunday officials estimated the fire had burned 2,600 acres and was zero percent contained.

“Every time we think we’ve got it, it goes across the line, and we’re racing to catch up. So we’re not ready yet, the danger’s not gone, until we get this so that we know it can’t cross, we’ve got to keep people out of there, and we just ask people to be patient with us.”

Leaders say about 200 personnel are currently working on the fire. Hotshot crews and other resources have been arriving throughout the day.

A larger Type Two incident management team will come in Sunday and plan to take over management of the North Hills Fire on Monday.

The Red Cross is officially opening an evacuation shelter tonight at 7:00 p.m. The shelter is at Helena First Assembly of God Church, at 2210 Dodge Avenue. The shelter has been on standby for several days.

Updates to the North Hills Fire are posted on the national incident management website Inciweb.