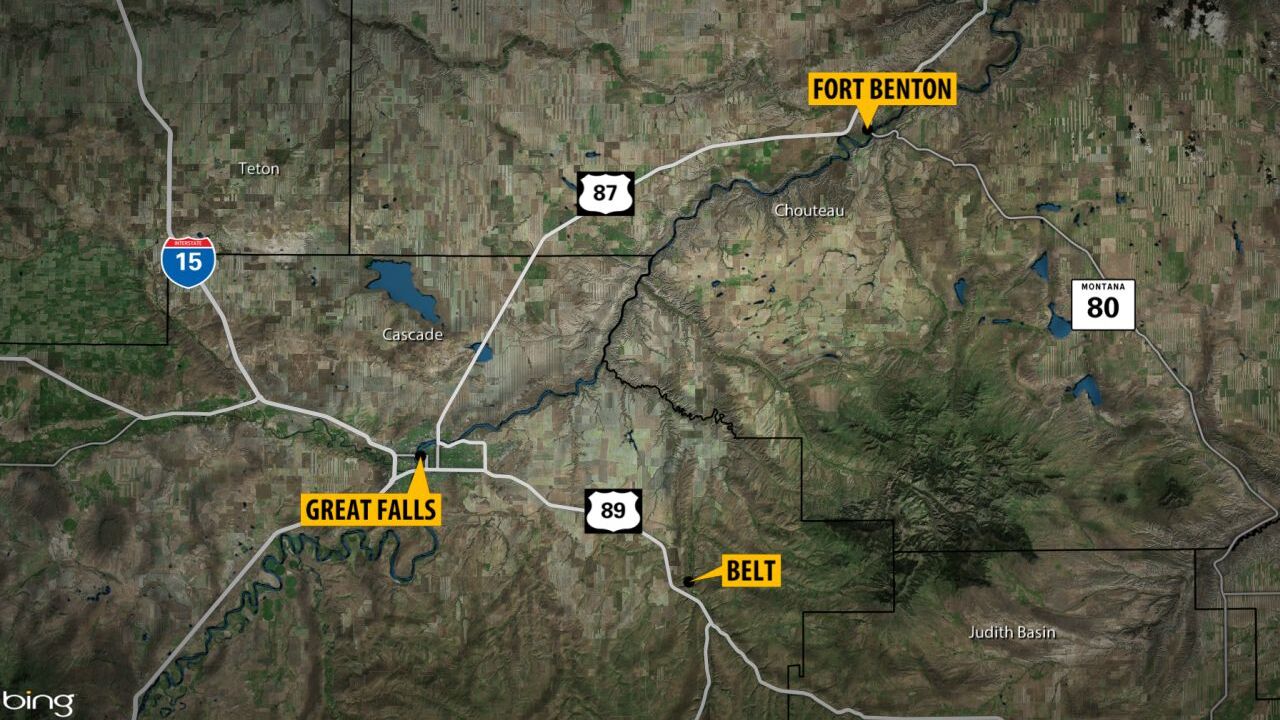 (UPDATE, 10:03 pm) Cascade County Sheriff Jesse Slaughter says that Highway 89 and Highway 87 are now both open. He thanked everyone for their cooperation and patience.

There are still some areas in and around Great Falls that are without power; NorthWestern Energy has been working since the outages began earlier today to get all service restored, but has not yet been able to provide an estimated time for full restoration to all customers.

(5:25 pm) The Cascade County Sheriff's Office said at 5:12 p.m. on Saturday that, in conjunction with the Montana Highway Patrol, they are closing two highways due to high winds and no visibility.

The closures are as follows:

The Sheriff's Office said: "There have been numerous vehicle accidents with injuries, these crashes involve two Sheriff’s patrol cars. Two deputies and one citizen are being treated for minor injuries."

Undersheriff Cory Reeves says that they plan on having these roads shut down until early Sunday morning.

The windy, dry conditions have also created a fire danger. The Sand Coulee Fire Department is responding to reports of a high voltage power line down on the east end of Great Falls.

At around 3:30 p.m., Sand Coulee Fire was called to reports of a grass fire at 57th street and 8th Avenue South. Crews are attempting to keep the fire from crossing the highway and all south bound traffic is blocked at this time. At this point, there are no reports of injuries or threatened homes or businesses. At 5:07 pm, Great Falls Fire Rescue said that 57th Street has been re-opened to traffic.

We have also received word of a wildland fire near the Spion Kop Wind Farm between Raynesford and Geyser, and a possible ranch fire near Montague, between Highwood and Geraldine.

Just after 3:00 pm we received reports of a semi rolled over on U.S. Highway 89 by mile marker 76 near Belt. Initial reports indicate the semi is blocking 3 of the 4 lanes. This was just after receiving word that the road is shut down from Great Falls to Belt due to the high winds and low visibility. There are no reports of serious injuries.

Numerous power lines around town have been knocked over due to the wind, causing power outages. We are receiving unconfirmed reports of roads in Great Falls being shut down due to power lines and trees blocking the road. We have heard several reports of roofs being blown off of homes and at least two of those have affected power lines nearby.

Traffic signals are down on 10th Avenue South from Warden Bridge (2nd Street South) to at least 32nd Street South. They are also reportedly down at 25th Street and Central Avenue but this has not been confirmed.

If traffic signals are not working, drivers should treat the intersection as a complete stop in all directions.

Geraldine Schools are also canceling the Centerville and Geraldine High School basketball games this afternoon due to the road closures. They will update teams if they reschedule the games but at this time they are canceled.

We do expect the winds to die down this evening as a cold front moves in. Here is the latest forecast .

(SATURDAY, 10:46 am) On Saturday morning, the National Weather Service in Great Falls reported a gust of 106 miles per hour at the Deep Creek weather station in Glacier County.

Other recorded gusts include Cut Bank Airport at 78 mph, Choteau at 74 mph, Rogers Pass at 65 mph, and Great Falls and Cascade both at 63 mph.

The strong winds are expected to continue throughout the day, and a Red Flag Warning will be in effect for much of the area throughout Saturday. The combination of warm, dry air, coupled with strong winds and minimal snow cover will lead to an increased risk of grassland fires. The NWS said: "Please be mindful of any activity that could create a spark under these critical fire weather conditions."