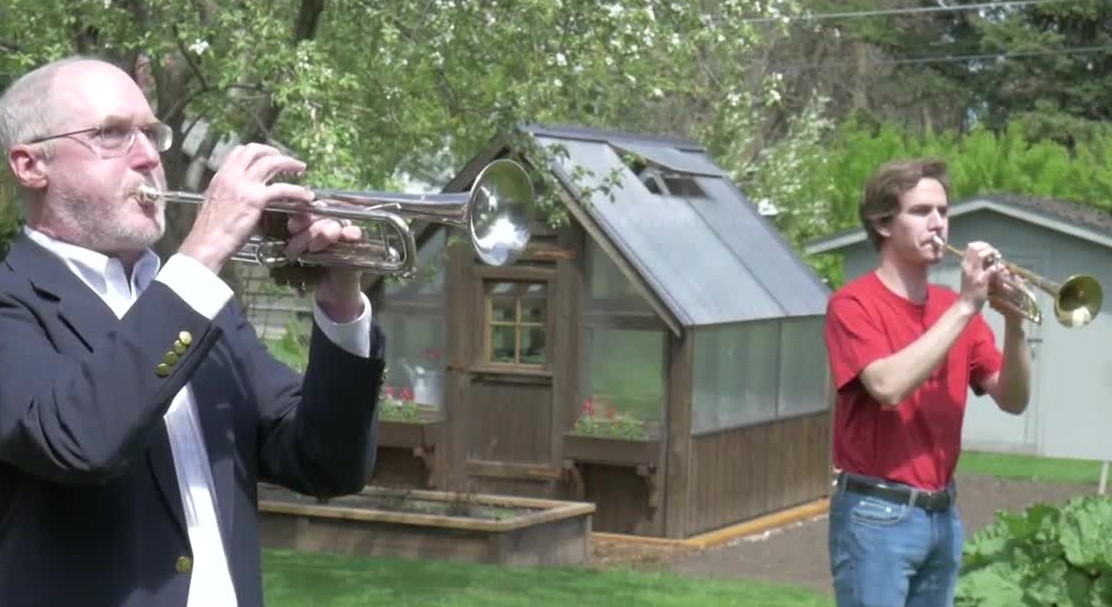 You may have heard about CBS national’s correspondent Steve Hartman’s “Taps Across America” , encouraging musicians of all abilities to play Taps from outside their home today at 3pm local time.

People in Bozeman decided to participate in the event.

When Sarah Stoneback heard about “Taps Across America”, she quickly got a group of people together to turn the idea into a personal reality.

“Taps in general is so moving. It has much meaning behind it” said Stoneback.

Especially for her family. Stoneback played Taps today alongside her father, a marine veteran.

“Taps because of its emotion carries a great deal of weight and responsibility,” said Ronald Stoneback.

A crowd gathered to watch the Stonebacks play, accompanied by other musicians like 6th grader Oscar, and next door neighbor and friend Stewart, whose father served in the Navy.

And this wasn’t the only performance that took place in Bozeman.

“Music is one of those things that it gives in two directions,” said Michel Sticka, director of bands at Chief Middle School in Bozeman.

Sticka taught her students how to play the song virtually so they could prepare for Taps Across America.

“As a musician playing music can give you a lot of personal fulfillment, but also we have a responsibility and the joy of sharing our music with others.”

A number of band students participated, adding to the echo of one of the country’s most respected songs.

At home with the Stonebacks, everyone could agree, it was nice to be together again, playing music to honor those who have served our country.

“Even at a social distance. It was overwhelming to be a part of,” said Ronald Stoneback.