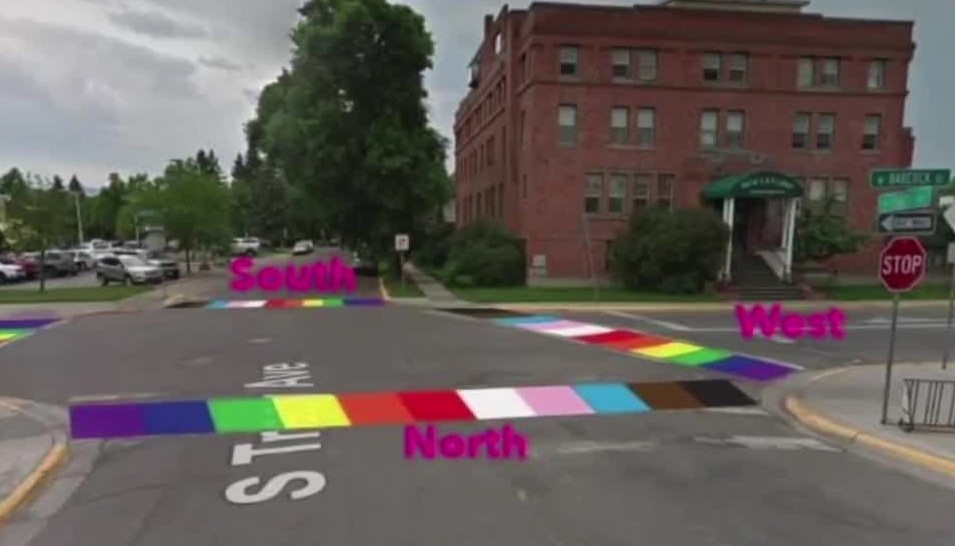 Two downtown Bozeman intersections are about to undergo a unique facelift with a message, not in construction, but with bright colors that stand for something much bigger.

When it comes to sending powerful messages, sometimes a little goes a long way.

And for these two intersections in Bozeman, one at Tracy and Babcock and the other at Mendenhall and Willson, three groups are making that happen using all colors of the rainbow.

To us, crosswalks are ways to cross the street.

In Bozeman, eight crosswalks are about to be given a new meaning and brightly so.

“The rainbow, in itself, has been a bold symbol of inclusivity and pride,” Coburn says. “For a long time and so that’s something that’s really important to us as a community.”

Coburn adds the colors stand for LGBTQ community and beyond.

“I think that this powerful symbol will make the feeling that I have something that other people can maybe tap into and experience,” Coburn says.

So, the GEM board teamed up with the Downtown Bozeman Partnership and the City of Bozeman.

And in just days, starting Thursday, Aug. 13, these intersections will transform with some added colors.

“The light blue, pink and white are specifically referencing and acknowledging trans and gender diverse or gender-nonconforming individuals,” Coburn says. “The black and brown stripes are meant to remind us all that there’s certain factors about their lives that might make it easier or harder for them to be accepted or included.”

“It’s a really cool concept,” says Jeff Mihelich, Bozeman City Manager. “The idea really is to make sure that when people come to the City of Bozeman that they feel welcomed.”

Around 100 organizations and local businesses signed in support of the project.

Mihelich agrees: a little color will go that distance.

“I think it’s critically important,” Mihelich says. “I think a lot of people in the City of Bozeman crave diversity and want to see more people in this community of all different races, creeds and colors and however anybody identifies themselves, we want them to feel respected here.”

In a way, these crosswalks still exist for us to cross the road.

But now these will mean crossing more kinds of roads than concrete ones.

The project should be all done by Friday, Aug. 14, weather-permitted.