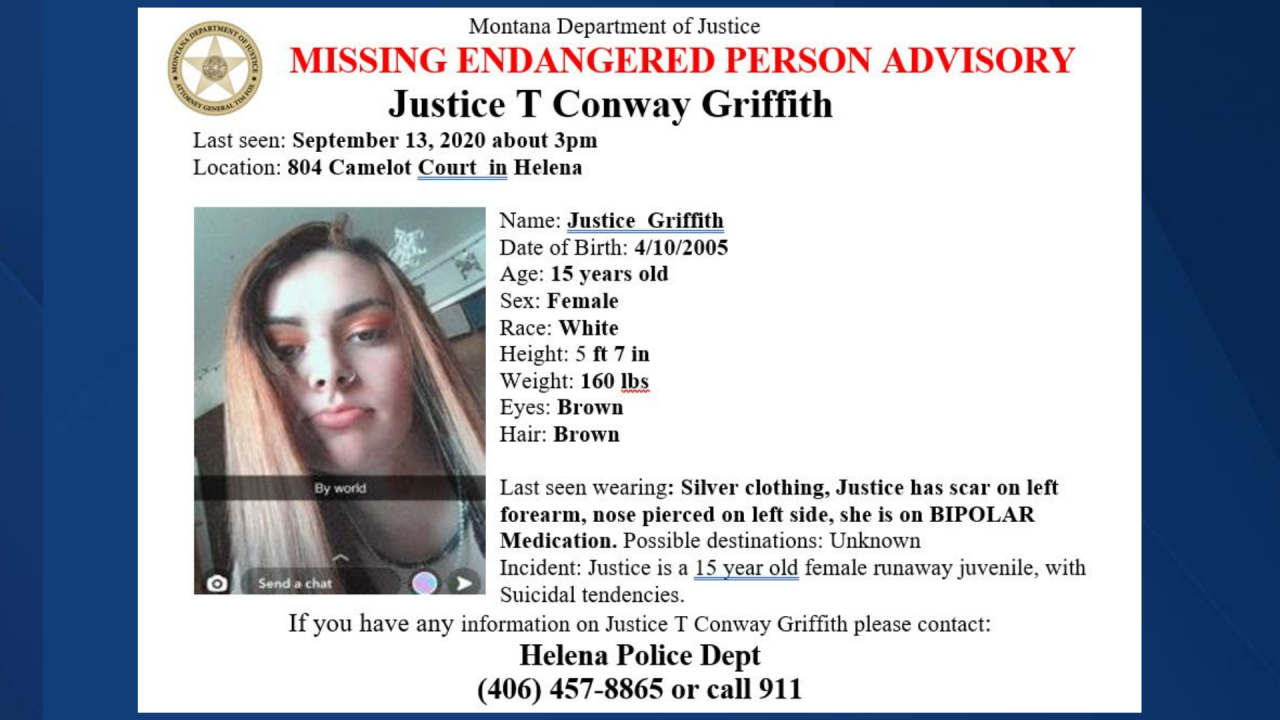 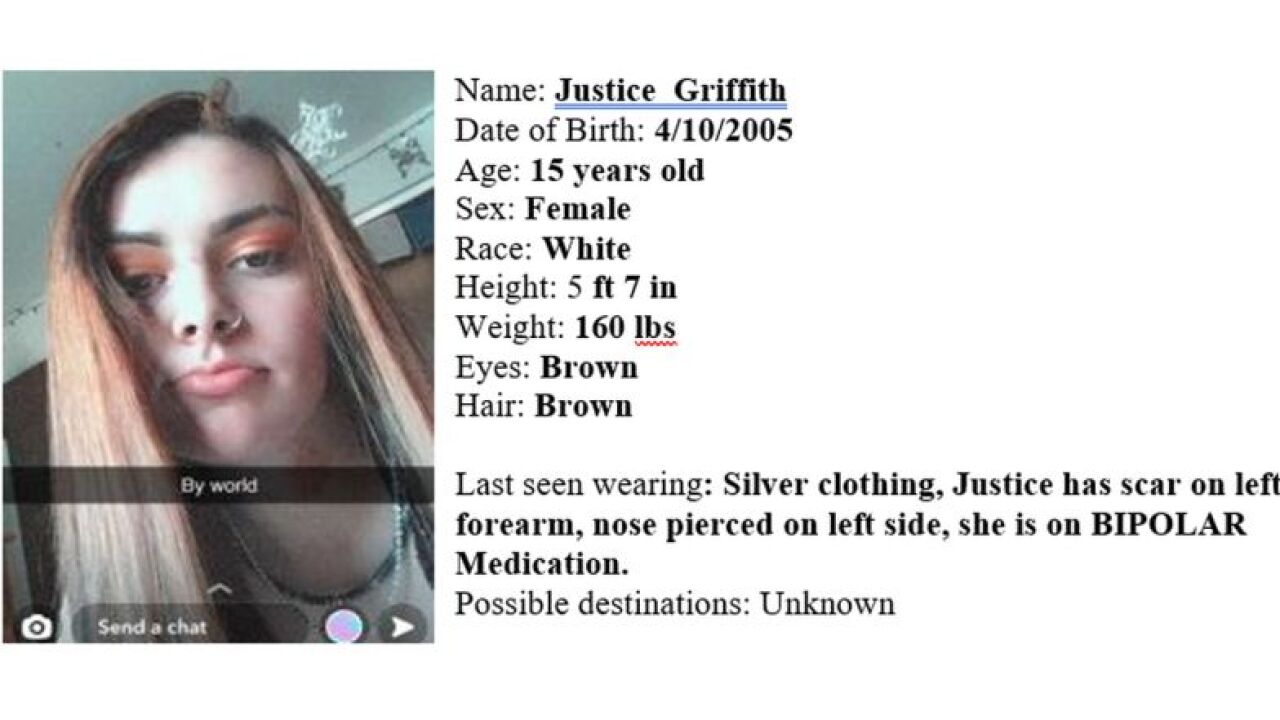 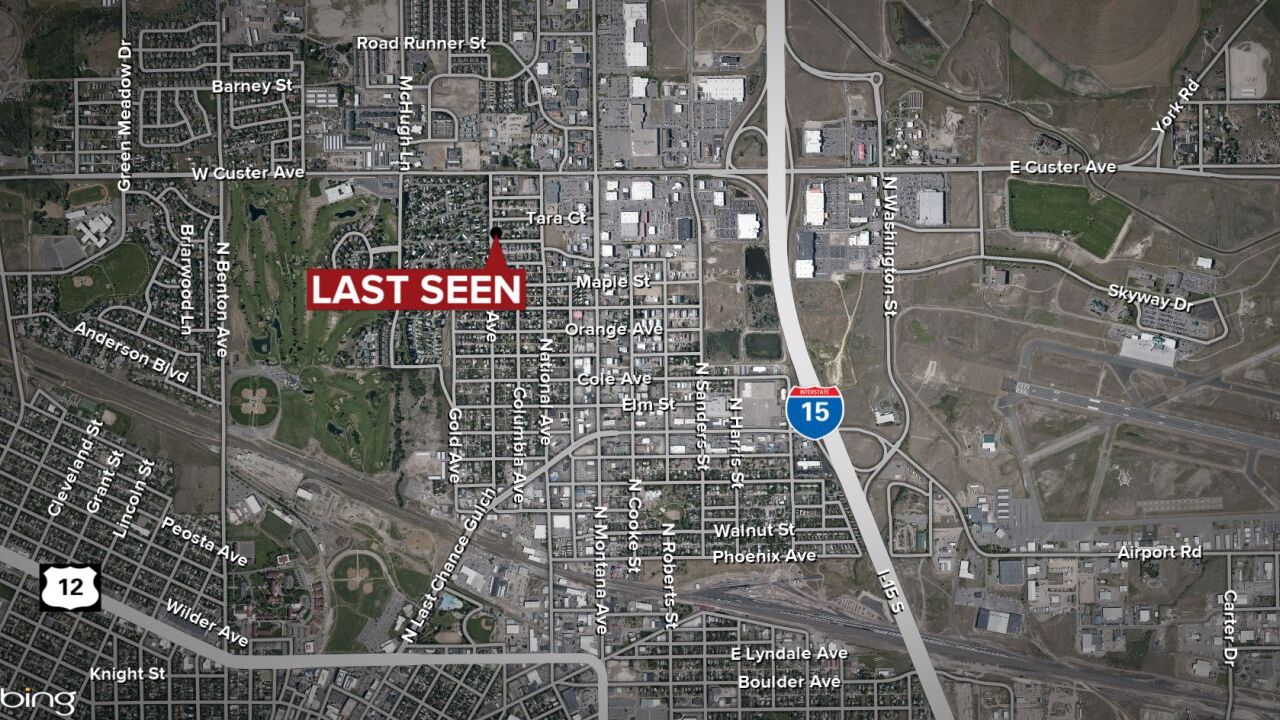 The Montana Department of Justice has issued a Missing-Endangered Person Advisory for Justice T Conway Griffith, a 15-year old runaway, at the request of the Helena Police Department.

Griffith is 5'7", about 160 pounds, with brown hair and brown eyes. She was last seen wearing silver clothing, and has a piercing on the left side of her nose.

She was last seen on Sunday, September 13, at about 3 p.m. in the vicinity of Camelot Court in Helena.

She reportedly has made suicidal threats. No other details have been released.

If you have any information on Justice Griffith, you are asked to call the Helena Police Department at at 406-457-8865 or call 911.

Whenever a child is reported missing in Montana, law enforcement agencies work quickly to determine the circumstances, and whether or not to issue an AMBER Alert, or a Missing/Endangered Person Advisory (MEPA). The AMBER Alert program started in Texas in 1996 after 9-year old Amber Hagerman was abducted and murdered. In response to community concern, broadcasters in the area teamed up with law enforcement agencies to establish a program capable of quickly distributing information about child abductions to the general public.

In memory of Amber, the program was called the AMBER Plan – America’s Missing: Broadcast Emergency Response. In Montana, officials also have the option of issuing a Missing/Endangered Person Advisory. Here is the difference between the two:

AMBER ALERT All of the following criteria must be met, according to the MT DOJ:

The AMBER Alert system is not used to track runaways, missing children or children involved in custody disputes. The program is restricted to child abduction cases that could be life threatening.
MISSING/ENDANGERED PERSON ADVISORY: A MEPA Advisory is initiated solely by Montana law enforcement agencies using the following criteria, according to the MT DOJ: