Jestin Dupree and Brandi King announced their withdrawal on Facebook 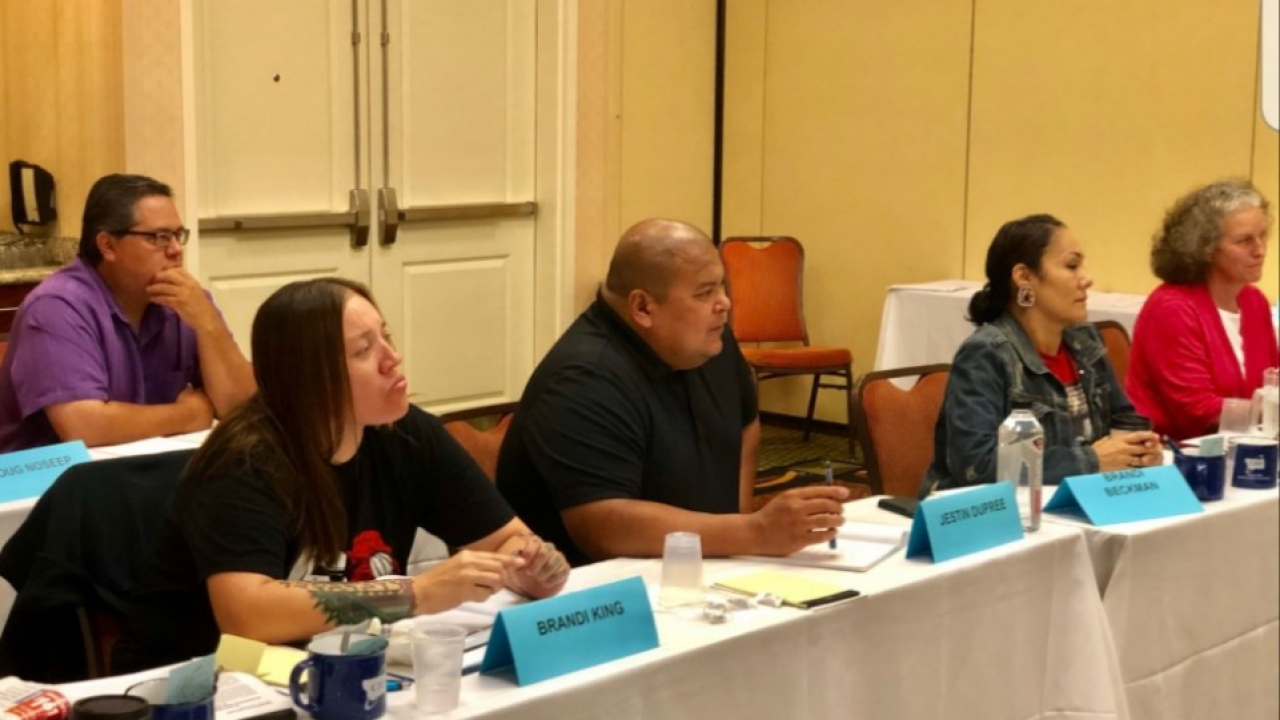 Two representatives from the Fort Peck and Fort Belknap Indian reservations pulled out of Attorney General Tim Fox’s new Missing Indigenous Persons Task Force on Monday after Fox filed to intervene in a lawsuit against the proposed Keystone XL pipeline in support of the Trump administration and pipeline company TC Energy, formerly TransCanada.

The Fort Peck tribes and the Fort Belknap Indian Community of northeast Montana have long opposed the pipeline, which would carry oil from the tar sands of Alberta through the state, passing close to both reservations. Towns surrounding the reservations, including Nashua, Circle, Hinsdale, and Baker, are slated to lodge pipeline workers in man camps, which have been associated with increased rates of drug trafficking and sexual violence in the neighboring Bakken oil fields.

John Barnes, Fox’s communications director, did not respond to a request for a phone interview, but did email a statement to Montana Free Press:

“We are disappointed that some members have chosen to leave the task force created by Sen. Jason Small’s Senate Bill 312, but we are looking for others who want to serve and help address this important issue,” Barnes said in an email to Montana Free Press. In a follow-up email on Wednesday, Barnes said that Fox would “ask the departing members’ tribal governments to recommend replacements” on the task force.

Fort Peck Executive Board member Jestin Dupree and Fort Belknap Tribal Council member Brandi King announced their withdrawal from the task force in separate Facebook posts Monday, shortly after Fox issued a press release announcing he had filed to intervene in the lawsuit.

Dupree later updated his post to say that Fox had called and asked him to reconsider, but Dupree said he declined due to the risk the pipeline and man camps pose to tribal members. He also claimed in his post that Fox created the task force only because he is running for governor and wants tribal votes.

“Our tribe opposes the pipeline and then the state wants to go forward knowing our stance and I won’t be a part of this task force any longer. It was nice to attend these MMIP TF [Montana Missing Indigenous Persons Task Force] meetings and to get on the same sheet of music but then a slap in the face like this is just a let down,” Dupree wrote.

Dupree later said in a phone call with Montana Free Press that he doesn’t know if any other task force members intend to withdraw. He said he did email them copies of his statement.

“On one hand, he’s rubbing our back, but on the other hand, he’s punching us in the stomach,” Dupree said of Fox.

King did not respond to multiple requests for comment Tuesday. King said Monday on Facebook that she is at a prayer ride in Minnesota with Anishinaabe, Dakota, and Lakota relatives after meeting with Ojibwe writer, pipeline opponent, and former Green Party vice-presidential candidate Winona LaDuke over the weekend.

“Ironic that this ride starts on the day I hear about MT DOJ’s support of the KXL Pipeline, which will DESTROY Nakoda and Aaniiih Sacred Sites,” King said in the post, referencing a separate lawsuit filed by the Fort Belknap Indian Community to block the Keystone pipeline’s threat to historical sites sacred to the reservation’s Assiniboine and Gros Ventre tribes.

“Does he [Fox] know Fort Belknap is in litigation against the Trump Administration and the proposed destruction of some of our most sacred [sic]. I guess the MT DOJ really doesn’t give a shit,” she wrote.

On Wednesday, a Great Falls federal court judge is hearing arguments on several motions in the lawsuit Fox has filed to intervene in. Plaintiffs, including the Northern Plains Resource Council, Sierra Club, and Natural Resources Defense Council, want Judge Brian Morris to grant an injunction preventing construction of the pipeline.

“We’re disappointed that Attorney General Fox is using the state’s resources to help a Canadian energy corporation export their products to foreign markets. Montana’s interests are best served by ensuring clean water for all, including drinking water at Fort Peck and irrigating water for Montana’s farmers and ranchers. Northern Plains will continue to stand up for everyday Montanans and the safety of our clean water. We hope Attorney General Fox will reconsider these misguided efforts.”

Morris granted an injunction blocking the pipeline last November, but President Trump used two executive orders to change the rules on how pipelines are permitted, and the U.S. 9th Circuit Court of Appeals ruled the injunction moot in June, greenlighting construction, and leading to the latest lawsuit. Another anti-KXL lawsuit by the Indigenous Environmental Network has a hearing scheduled for Thursday in the same court.

The pipeline company and the federal defendants will present arguments Wednesday as to why Morris should dismiss the environmentalists’ lawsuit.

Fox’s attempt to join the lawsuit is not the first time he has enlisted state resources in support of the Keystone XL pipeline.

According to emails obtained last year by the ACLU of Montana and analyzed by Montana Free Press , the Montana DOJ under Fox has worked with the federal government and other Montana agencies to train law enforcement officers on the proposed Keystone XL route in surveillance of environmental activists.

A report co-authored by the Montana DOJ’s counterterrorism fusion center in the aftermath of the anti-Dakota Access Pipeline protests on and around the nearby Standing Rock Indian Reservation in the Dakotas conflated environmental activists with terrorists, according to the ACLU of Montana.

Other emails obtained by the ACLU show the Montana Highway Patrol has coordinated with the Federal Emergency Management Agency to train law enforcement along the pipeline route in extricating protesters who have locked themselves to construction equipment. FEMA also trained Montana law enforcement officers in baton-holding and mass-arrest.

“As an official who has sworn an oath to the Constitution of Montana, Attorney General Fox should be committed to protecting the First Amendment rights of protesters, not blindly supporting a commercial venture that will leave in its wake lasting damage to the relationship between the state and tribes, environmental degradation and a likely increase in the epidemic of missing and murdered Indigenous women,” Rate said.

In a follow-up response on Wednesday to a Montana Free Press inquiry, Barnes wrote, “Our coordination and training with local law enforcement agencies includes training on protecting the civil rights of anyone who chooses to engage in protest activities.”