Ceremony honored the first Native American woman to enlist in the US Marine Corps
Posted: 6:06 PM, Aug 09, 2019
By: Lindsie Hiatt 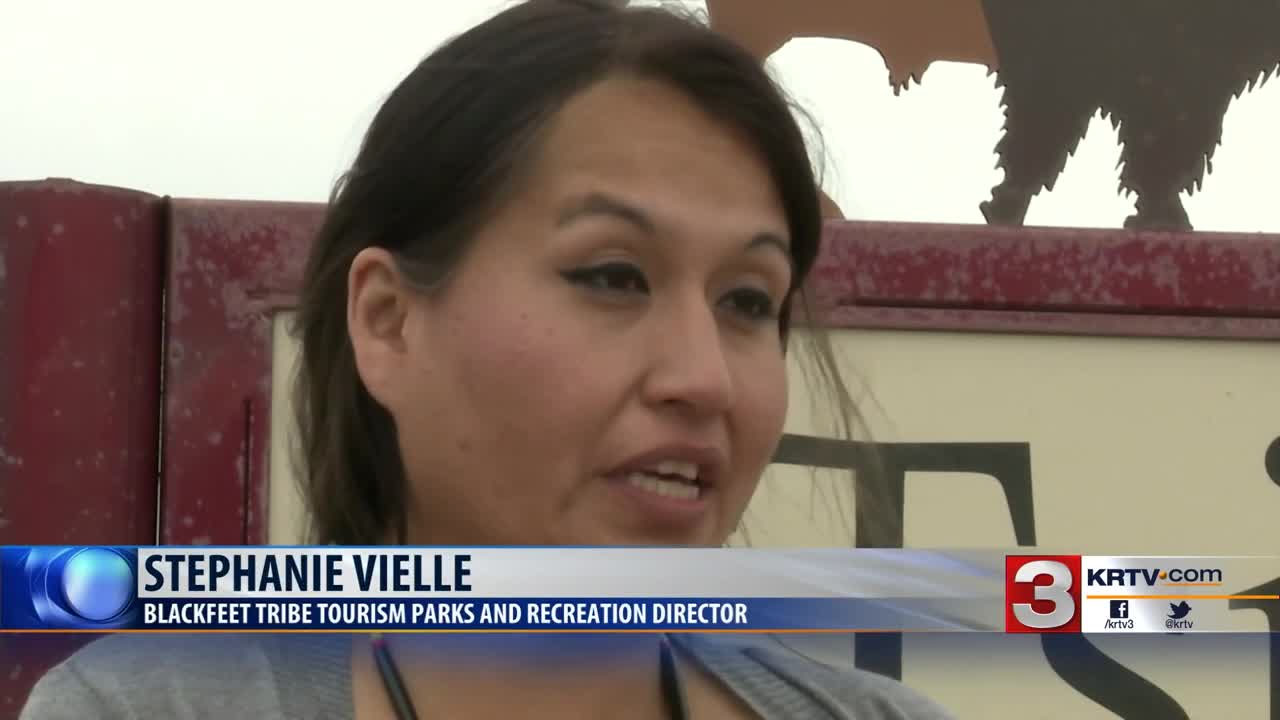 A section of US Highway 89 was officially dedicated on Friday as "Minnie Spotted-Wolf Memorial Highway" in honor of the first Native American woman to enlist in the United States Marine Corps.

Many spectators attended the dedication ceremony, including family members, guest speakers, and members of the Blackfeet Tribe she belonged to before she passed away.

Minnie is one of three Montana women to have a portion of the highway dedicated to her.

You can see the sign for yourself at the southern tip of the Blackfeet Indian Reservation near mile marker 85.

Raised on a ranch near Heart Butte, Spotted Wolf stated that growing up doing such ranch work as “cutting fence posts, driving a two-ton truck, and breaking horses” prepared her for the rigors of Marine Corps boot camp, which she was quoted as saying was “hard, but not too hard,” according to the National Archives Foundation .

The National Archives says that Spotted Wolf served for four years in the Marines as a heavy equipment operator as well as a driver for visiting general officers on military bases in Hawaii and California.

After her discharge in 1947, Spotted Wolf returned to Montana. She married Robert England and attended college, earning degrees in Elementary Education.

After a 29-year teaching career, Minnie Spotted Wolf passed away in 1988.

The designation was authorized by the Montana Legislature earlier this year; below is the full text of the House bill:


AN ACT ESTABLISHING THE MINNIE SPOTTED-WOLF MEMORIAL HIGHWAY IN PONDERA COUNTY; DIRECTING THE DEPARTMENT OF TRANSPORTATION TO INSTALL SIGNS AT THE LOCATION AND TO INCLUDE THE MEMORIAL HIGHWAY ON THE NEXT PUBLICATION OF THE STATE HIGHWAY MAP; PROVIDING AN APPROPRIATION; AND PROVIDING AN IMMEDIATE EFFECTIVE DATE.

WHEREAS, Minnie Spotted-Wolf was born on a ranch near Heart Butte, Montana, in 1923; and

WHEREAS, Minnie Spotted-Wolf was a member of the Blackfeet Tribe; and

WHEREAS, as a young woman, Minnie Spotted-Wolf worked her father's ranch, where her work included driving a 2-ton truck and breaking horses; and

WHEREAS, Private Minnie Spotted-Wolf became the first Native American woman to serve in the United States Marine Corps when she enlisted in the Marine Corps Women's Reserve in July 1943; and

WHEREAS, Minnie Spotted-Wolf's ranch working experience served her well as a heavy equipment operator and driver for the United States Marine Corps; and

WHEREAS, Minnie Spotted-Wolf served in the United States Marine Corps in World War II and in peace time, from 1943 to 1947; and

WHEREAS, after her military service, Minnie Spotted-Wolf earned a Bachelor of Arts degree in Elementary Education from Northern Montana College and spent 29 years as a teacher; and

WHEREAS, Minnie Spotted-Wolf passed away on January 1, 1988, leaving a legacy of service, both as a Marine and as a teacher; and

WHEREAS, the 66th Legislature of the State of Montana honors Minnie Spotted-Wolf for her exemplary life of service and leadership.

BE IT ENACTED BY THE LEGISLATURE OF THE STATE OF MONTANA:

(2) The department shall design and install appropriate signs marking the location of the Minnie Spotted-Wolf memorial highway.

(3) Maps that identify roadways in Montana must be updated to include the location of the Minnie Spotted-Wolf memorial highway when the department updates and publishes the state maps.

Section 2. Appropriation. There is appropriated $1 from the general fund to the department of transportation for the fiscal year ending June 30, 2020, for the purpose of [section 1].

Section 4. Effective date. [This act] is effective on passage and approval.