Analysis: The facts behind Gianforte’s ad attacking Williams on immigration 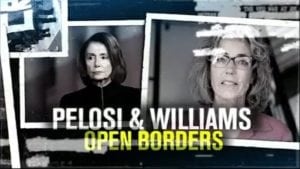 But some of the ad’s leading claims misrepresent Williams’ stated views on the subject.

Here’s an examination of the Gianforte ad’s claims and the facts behind them:

Williams is “the candidate (for) radicals (who) want to abolish ICE”: ICE is the acronym for Immigration and Customs Enforcement, an agency within the U.S. Department of Homeland Security, that enforces federal laws on border control.

In the wake of the Trump administration’s crackdown on illegal immigration, some groups and Democrats have called for abolishing or overhauling ICE. Williams is not one of them.

The Gianforte campaign defends the ad’s statement by noting that the Montana Chapter of the group Indivisible is supporting Williams – and that the national group has called for the abolishment of ICE.

Williams, who has called the Gianforte ad “false and misleading,” says she supports ICE and its officers and cracking down on drug- and human-trafficking across the border.

Williams would “vote with (House Democratic Minority Leader Nancy) Pelosi for open borders and amnesty”: Williams said late last month that, if elected, she will not support Pelosi as the Democrats’ U.S. House leader.

Williams also has not said anything to indicate that she supports “open borders and amnesty” for illegal aliens.

She says she supports border security, but does not support a “coast-to-coast border wall,” which she believes would be “costly and inefficient.”

Williams also supports creating a path to citizenship for so-called “dreamers,” who are youths and young adults who were brought to the United States as children, by non-citizen immigrant parents.

She notes that Republicans, who control Congress, have failed to pass comprehensive immigration reform, and said she wants to work with “people of all political stripes to get results” on immigration.

Williams supports the Iranian nuclear deal “that gave billions to the leading funder of terrorism”: Williams has spoken in favor of the deal brokered by the Obama administration and five other countries in 2015, to prevent Iran from developing nuclear weapons.

The agreement also lifted economic sanctions against Iran and unfroze about $100 billion of Iranian assets in overseas accounts.

Williams said in a Facebook post this May that nuclear inspectors have confirmed that the “deal was working” and that it was the “best avenue that we have currently available” to keep Iran years away from having a nuclear weapon.

The Trump administration’s decision to abandon the deal “undermines our credibility to negotiate future arms-control measures,” she said.

During the campaign, Williams has rarely talked about immigration as an issue, instead focusing more on health care, land-use policy, education, taxes and gun safety.