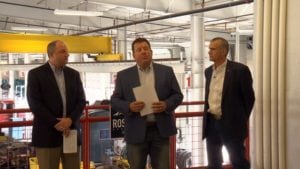 BILLINGS- In a short ceremony Friday at Montana Peterbilt in Billings, the executive director of the northwest region of the U.S. Chamber of Commerce, Chris Eyler, delivered the chamber’s official nomination of Republican U.S. Senate candidate Matt Rosendale.

The ceremony highlighted the positive effects the Tax Cuts and Jobs Act has had on local business owners like Montana Peterbilt owner Kevin Gustainis, who introduced Rosendale, Montana’s current state auditor, and spoke about his own company’s growth.

“Eighteen months ago, Montana Peterbilt employed about 80 people…Today we are at 90 employees and I currently have 14 more job openings,” said Gustainis.

Rosendale spoke briefly about his campaign, his opponent, incumbent Democratic Sen. Jon Tester, and how the Tax Cuts and Jobs Act can continue to be effective moving forward.

“To make sure that we continue this pro-growth agenda that we see taking place across this great nation of ours…we are going to have to send Republicans back to the United States House and the United States Senate,” he said.