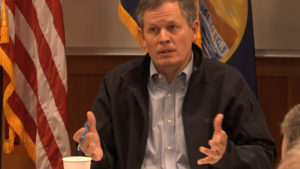 HELENA – Local law-enforcement and other officials gave U.S. Sen. Steve Daines, R-Mont., a frank assessment Thursday of the illicit drug problem facing Montana – and said federal help is certainly needed when it comes to battling methamphetamine use and trafficking.

“We can’t do it alone,” said Lewis and Clark County Commissioner Jim McCormick. “We need resources. And not just money, but the subject-matter experts who can provide information, support for us, at the county level, as we move forward.”

Jeff Kushner, drug-court coordinator for the Montana Supreme Court, also said two important steps are needed to help tackle meth use in Montana: Encourage wider use of the drug naltrexone to help addicts kick meth and allocate a block of money for each state for drug courts, rather than having states compete for grants.

“We’re relying on somebody inside the beltway, sitting at a desk at DOJ (Department of Justice) to make awards for drug courts in the state of Montana,” he said. “Is there anything more sillier than than?

“We know where the next drug court needs to be. I mean, we know that Missoula doesn’t have an adult drug court and they need one.”

Daines told Kushner that he would elevate those concerns to “the highest level” within the federal government.

“We’re hearing about more violent crime, horrible crimes that are occurring across our state,” Daines said. “Many of these are tied to drugs. It’s going to take a lot of work, cooperation and coordination of everyone in this room and around our state.”

Daines summarized the contents and results of the bill recently passed by Congress to combat an epidemic of opioid abuse in the country, including steps to better track drug shipments through the U.S. mail, allow Indian tribes to apply for anti-drug grants, and a $1 million grant for the Montana Highway Patrol to fight trafficking of meth.

While the legislation focused on opioid abuse, Daines said he’s done what he can to include elements directed at methamphetamine.

Kushner said the obsession with opioids at the federal level is getting in the way of fighting the meth epidemic in states like Montana.

Kushner said he’s been trying for years to get the National Institute on Drug Abuse to do the appropriate studies so that the drug naltexrone is recommended for treatment of meth addiction.

The drug reduces cravings for meth and other drugs, to help addicts kick the habit, but it remains “off-label” for meth, so physicians are reluctant to prescribe it, he said.