Apr. 2 is Equal Pay Day, a day symbolizing how far into the year women have to work to earn what men earned the previous year.

Bullock pointed to U.S. Census Bureau data, showing women in Montana are now making 73 percent of their male co-workers’ median earnings. That is up from 66.7 percent in 2013, the year Bullock launched an Equal Pay for Equal Work Task Force to address the issue.

The task force has provided wage negotiation trainings for women. It has also reached out to businesses to urge them to take action to reduce pay gaps. So far, almost 300 businesses around the state have signed onto an Equal Pay Pledge, committing to work toward equity in their hiring practices. 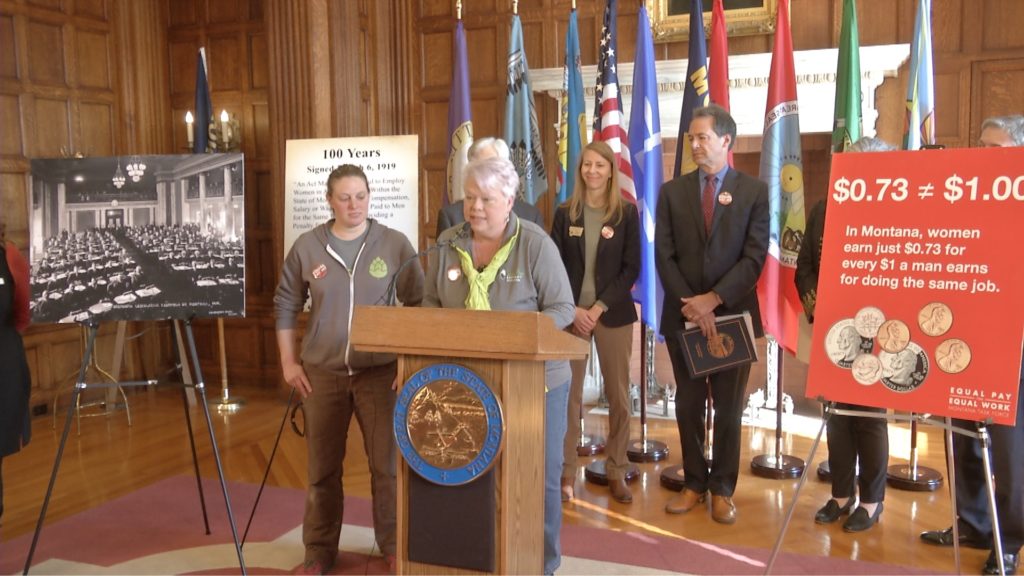 “I love that Montanans recognize the need for change and that the state is working with small businesses like me to raise awareness of the gender pay gap,” she said.

Edwards said she has seen women’s struggles to be treated equally during her years in the financial industry, and then as a brewer. She said, when Snow Hop hired Becky Peppelman as head brewer, it joined about four percent of breweries that put women in charge of production.

“I’m proud to say Snow Hop Brewery is in the minority,” she said.

“Their good work and the good work of employers all across the state really does deserve recognition,” she said. “However, as you’re hearing today, the numbers tell us, there is still so much more to do before we can all say we’ve stood up for all Montanans.”

Bishop sponsored House Bill 547, a bill aimed at creating “paycheck transparency.” It would have protected employees from retaliation for talking about their salary and blocked employers from requiring that job applicants reveal their past wages.

“Putting research and data at the center of our work has another positive benefit: It validates what women already know with our lived experience in the workforce,” she said.

Bullock urged lawmakers to support HB 547. He noted that 2019 marks 100 years since the Montana Legislature passed a law requiring that men and women receive the same pay for the same work, one of the first of its kind in the nation.

“If this group of legislators, which had two women legislators, can lead the nation on issues like equal pay, the sky is certainly the limit for today’s lawmakers and for Montanans all across the state,” he said.

But on the same day, HB 547 failed in the Senate Business, Labor and Economic Affairs Committee on a 5-5 vote. Committee chair Sen. Steve Fitzpatrick, a Republican from Great Falls, said he and the committee’s four Democrats voted for the bill, while the remaining five Republicans opposed it.

In statements, Bullock and Bishop said they were disappointed in the committee’s vote, but said they will continue working to reduce the wage gap in the state.

Edwards said she hopes other employers around Montana will consider taking their own steps to improve equality for their employees.

“I think that everyone should at least listen to what this committee has to say about equal pay, and think about it as an employer, for the women that you have employed for you,” she said. “Think about it, listen to it. It’s only fair.”

On Tuesday evening, Snow Hop and at least ten other breweries in the state are planning an “Unhappy Hour” event to highlight the wage gap. Between 6 and 7 p.m., they will offer women a 27 percent discount, based on the 27 percent gap. A full list of participating breweries is available here.