(HELENA) Wilmot Collins says, as Helena’s mayor, he’s seen the importance of listening to the people he represents. Now, he says he wants to bring that philosophy to Washington, D.C., as a United States senator.

“For far too long, and far too often, we have had politicians representing us in D.C., and not public servants,” Collins said. 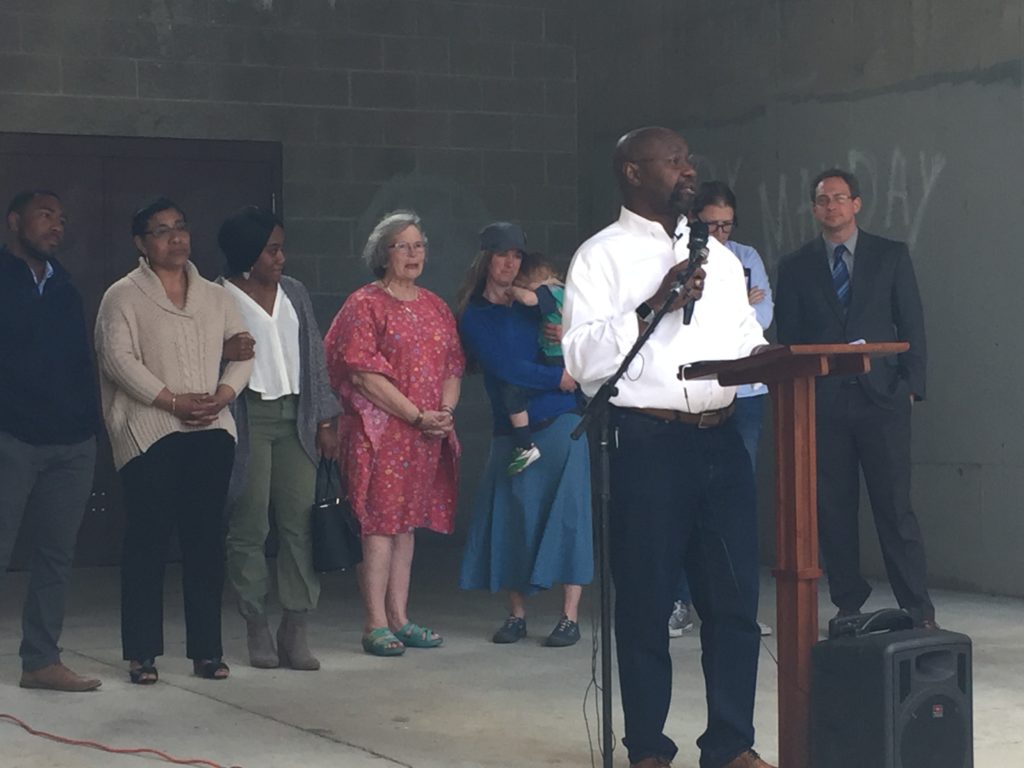 On Monday, Collins officially launched a campaign for Senate, in an event at Performance Square, on Helena’s downtown Walking Mall. He is the first Democratic candidate to announce a challenge to incumbent Republican Sen. Steve Daines of Bozeman.

“Somebody needs to change the climate in Washington,” he said. “If nobody’s stepping up, Mayor Collins is.”

Collins is a child protection specialist with the Montana Department of Public Health and Human Services, and a former member of the U.S. Navy Reserve. He began his political career in 2017, when he challenged Helena’s four-term incumbent mayor Jim Smith. Collins won, becoming the first black mayor officially elected in Montana.

Collins’ victory drew national media attention because of his background. He came to the United States in 1994, as a refugee from the civil war in his native Liberia. He joined his wife and daughter in Helena.

Collins called the welcome his family received in Montana an “improbable gift.”

“You gave my family an amazing life, which is why I wake up every morning finding new ways to serve and exemplify my eternal gratitude for this great state and nation,” he said.

Collins said one of his top policy priorities will be reforming the country’s campaign finance system.

“We don’t need anybody’s dark money influencing the outcome of our elections,” he said. “We are perfectly capable of using our own voice to determine our own representation.”

Collins said he plans to campaign in every county in the state.

A spokesperson for Daines’ campaign released a statement on Collins’ entry into the 2020 race.

“Sen. Daines looks forward to having thoughtful conversations during this campaign on how to best protect our Montana way of life and create good-paying Montana jobs,” they said.

Debra Lamm, chair of the Montana Republican Party, also released a statement, claiming that Collins will be out of step with Montanans.

“Wilmot Collins is just another liberal Democrat who will be a rubberstamp for the far-left’s radical agenda,” she said. “Collins will stand against President Trump every chance he gets and reverse all that we’ve accomplished these last few years.”

He made the announcement at an event in Helena just after noon.

Collins, a Liberian refugee, arrived in the United States in 1994 after fleeing a civil war in Liberia.  He first won a political office in 2017 when he defeated four-term Helena Mayor Jim Smith.

He currently works for the Montana Department of Public Health and Human Services and served 14 years as an Army Reservist and eight years with the Navy Reserve.

In the Helena mayoral race Collins, a Democrat, ran on a platform of increasing funding for public safety and addressing homelessness in the Helena community, particularly among veterans.

Collins earned national recognition following his narrow win in 2017. He was among a number of progressive candidates nationwide in traditionally conservative areas. He was also the first black mayor officially elected in Montana.

If he remains unopposed through the primary he is expected challenge Republican Senator Steve Daines in the November 2020 General Election.

Daines served one term in the U.S. House before winning a seat in the U.S. Senate in 2014.