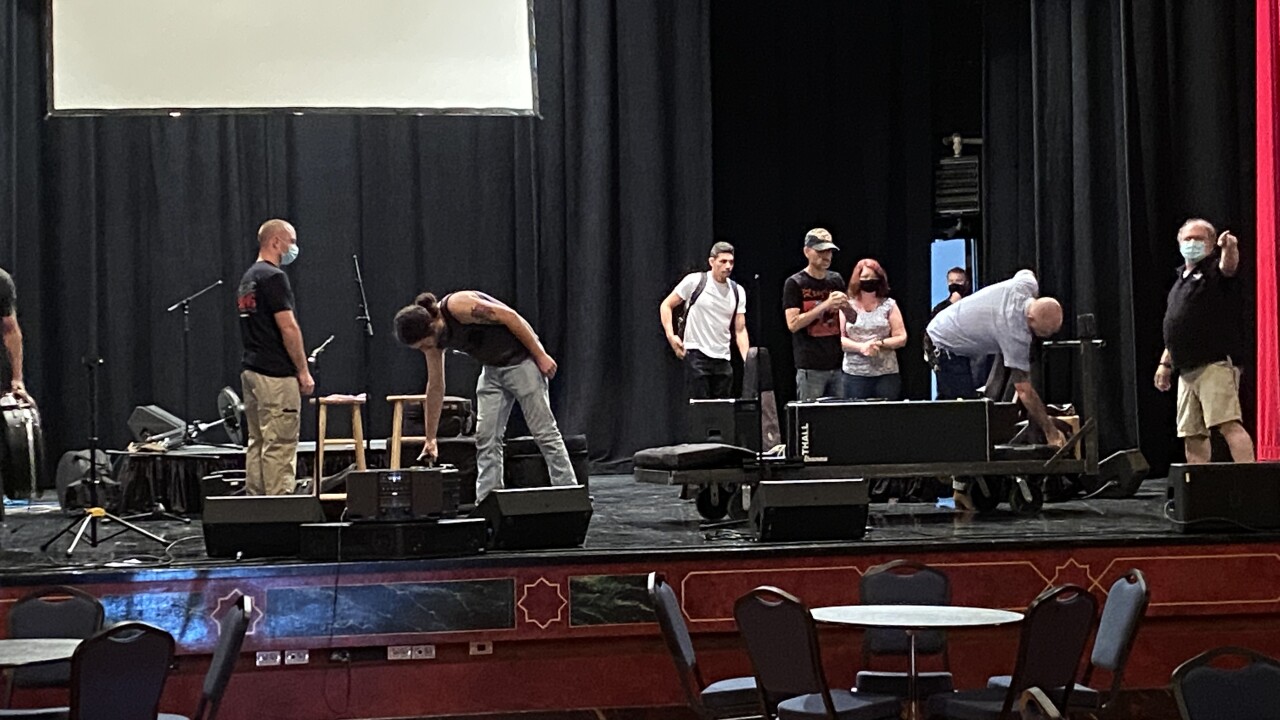 Copyright 2020 Scripps Media, Inc. All rights reserved. This material may not be published, broadcast, rewritten, or redistributed.
A crew sets up equipment ahead of Chris Petersen's Sept. 4, 2020, performance at the Helena Civic Center. 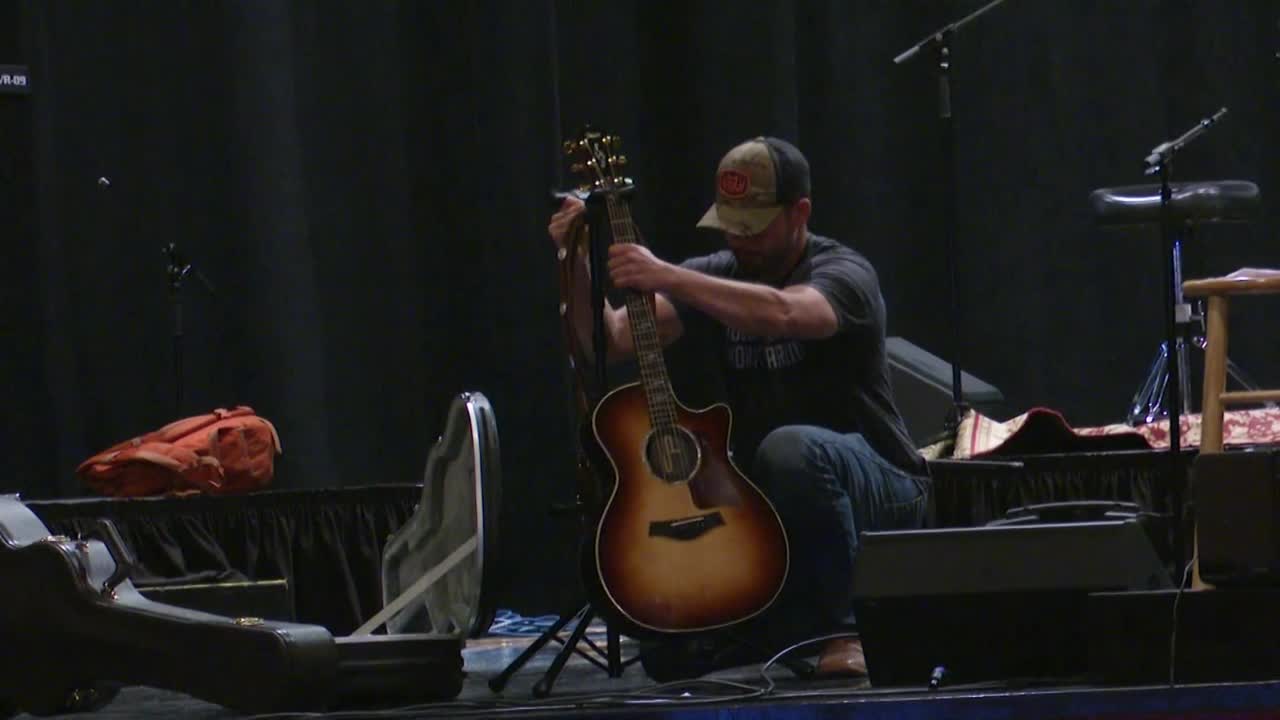 HELENA — The COVID-19 pandemic was a major disruption for activities at the Helena Civic Center. The facility hasn’t hosted any live performances since the start of COVID restrictions in March.

That is now changing, with several shows planned in the month of September. The first, on Friday evening, will be a concert by the country artist Chris Petersen. On Friday afternoon, crews began bringing in instruments and other equipment to set up for the show.

Civic Center leaders say they’ve worked closely with Lewis and Clark Public Health to come up with a workable plan for a live performance. They say they’ve wanted to be able to bring entertainment to the community, while keeping health in mind.

“We have really tried to mix the two, by allowing people to come out and have a good time with some live entertainment, but yet keeping them very safe,” said interim general manager Bridget Johnston.

The facility has created a new plan for entering the building, to limit contact. In addition to sanitizing surfaces, they have brought in a new system to circulate the air. Only 210 tickets will be available, for an auditorium that usually holds more than 1,900.

“For every person that buys a ticket, it’s going to leave an empty three seats in between them, and then every second and third row are closed off, so that you’ve got six feet front to back and six feet side to side,” said Johnston.

Leaders initially looked at holding two separate shows for Petersen, with time in between for cleaning, but they decided against it because of low ticket sales and to let him play a full set. Johnston said they’ve heard many people interested in attending a show, but fewer have actually purchased tickets.

“We’ve heard a lot of people assuming that the show is not going to happen, that it’s going to get cancelled, so we’ve really just been trying to get the word out that we are doing it, that we’re approved by the health department, and we’re good to go,” she said.

Limited tickets for the Chris Petersen show were still available Friday afternoon. The box office will open at 6 p.m., and the show will begin at 7 p.m.

“We are going to kind of use this as a test, see how the community responds,” Johnston said. “If it’s a pretty positive thing, we’re going to look for maybe some other acts to bring in between now and the end of the year.”

The Civic Center’s most frequent tenant, the Helena Symphony, is taking a different approach. Music director Allan Scott says public health guidance would make it challenging to have their full 78-member orchestra in the auditorium, let alone an audience. Instead, after meeting with their board, staff, donors and supporters, they opted to make a shift and hold their performances through the end of 2020 without an audience – but streaming online.

“The concert hall experience is so unique, you could never duplicate or replicate that, nor are we trying to,” Scott said. “We’re trying to innovate what we do.”

The Symphony partnered with AARP to launch “Homestream Your Helena Symphony.” The hour-long concerts will be shown live on Youtube, free of charge. The first show of their 66th season will be Sept. 19, featuring a performance by cellist Ovidiu Marinescu and Beethoven’s Symphony No. 7.

The performances will be at the Civic Center, with no audience present. Scott said they also worked out a plan with Public Health. They will build the stage out farther than usual – while having only 45 musicians – to provide greater distance. Plastic shields will separate the wind and brass sections, and those in the strings and percussion will wear masks.

A broadcast crew will film each concert with six to eight cameras.

“You will be able to see things that you could never see even if you were in the front row: seeing the conductor’s face from the front, seeing the soloists so close up,” Scott said.

Scott said they see this change as an opportunity.

Scott said performing without an audience will cost the Symphony about $18,000 per concert. They hope to make up some of those losses through donations.

Still, Scott said it was important to the Symphony to find a way to continue performances.

“We exist for this very reason: we exist to heal people, we exist to bring people together,” he said. “Music can still do that, albeit it is very different.”

Kristi Ponozzo, director of Helena’s Parks, Recreation and Open Lands Department, says they expect to see significant revenue losses at the Civic Center because of COVID-19. The facility has seen some use, including hosting public meetings and some court proceedings that require additional distancing. However, Ponozzo said they’re putting efforts into bringing shows back.

“We’re trying to figure out ways that we can make it economically feasible – both for us in the city of Helena to continue to run the Civic Center, but also for our clients to be able to afford a smaller, maybe no-audience or very-small-audience show,” she said.

The city recently approved a change to the Civic Center’s rental fees, reducing costs for performances with smaller audiences.

You can find more information about the scheduled shows at the Helena Civic Center on the center’s website.

You can learn more about the Helena Symphony’s upcoming season and streaming plans on their website.