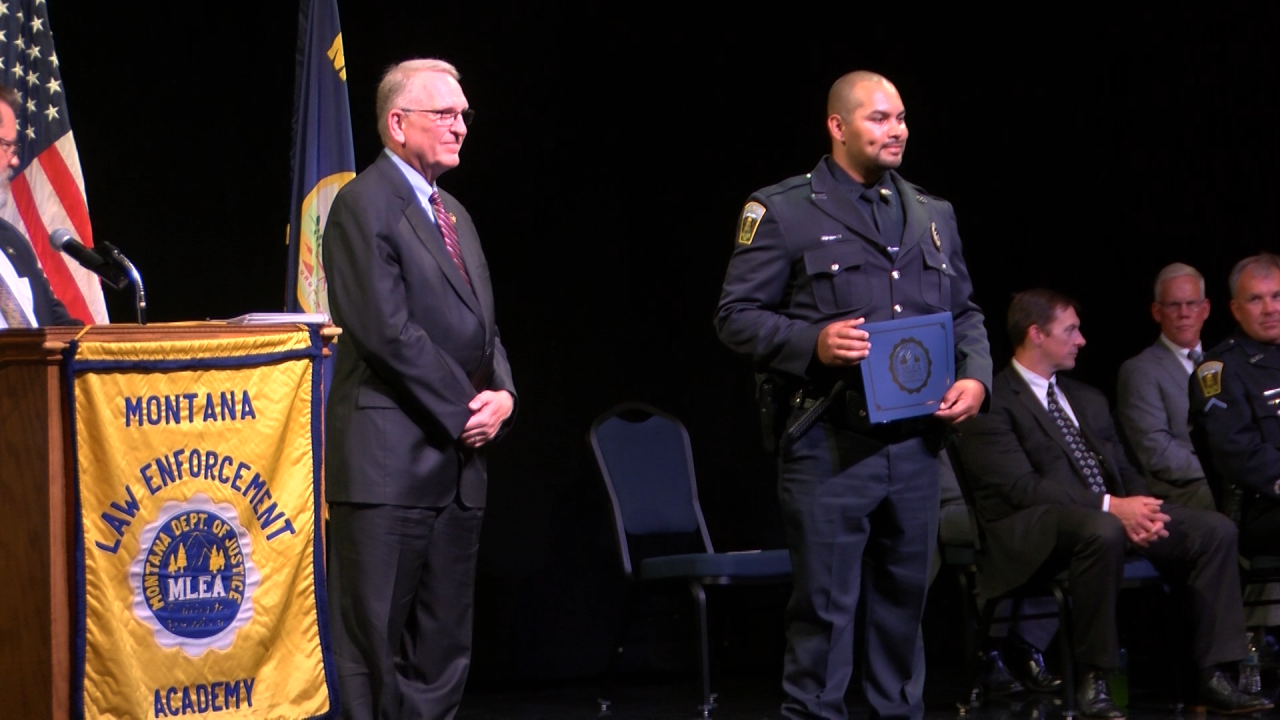 HELENA —
57 men and women have officially joined the ranks of Montana peace officers.

Families gathered at the Helena Civic Center Wednesday for the graduation ceremony of the 172nd class of the Montana Law Enforcement Academy (MLEA).

This class had to face some challenges like no class before them.

“You are entering service in an unprecedented time in the history of our state and our country,” said Montana Attorney General Tim Fox. “The next chapter of our great nation’s story remains to be written. Right now our environment is restless and anxious.”

COVID-19 significantly changed MLEA’s training protocols, and they were one of only a few academies to continue classes this spring.

MLEA rearranged the class schedule to include a combination of distance learning and compressed on-campus instruction time. To accommodate social distancing in the classroom, instructors taught from one classroom while students were placed in multiple classrooms while seated six feet apart.

The officers are also entering the job during a time of scrutiny towards the profession following the death of George Floyd while in Minneapolis Police custody..

“It has been difficult watching the acts of destruction and chaos that have impacted and divided our country,” said Fox. “While we need to do the hard work and address how people of diverse backgrounds are treated by the law enforcement community and how we mutually perceive each other, I continue to be supportive of officers and all the good and heroic things the vast majority of them do daily without recognition. My hope is that the good will ultimately come from this chapter in our collective story, and it will benefit the law enforcement profession, soften the divide and bring us together to heal our nation.”

“We were aware of all of the things happening in the nation, it was not a topic that was off the table of discussion,” said Hammond. “What we came up with as a class, and really promised each other, is that we’re going to continue to do the job that we’ve been trained to do with integrity, respect, fairness and impartiality. If we stick to that I know we’ll do well.”

Every graduating officer MTN spoke with said they took up the badge to help, and can’t wait to start protecting their communities and making a difference in the lives of the people that live there.

“I’ve wanted to do this since I was [my kid’s] age,” said Joseph Matt with the Flathead Tribal Police Department. “I’m really excited to join law enforcement just so I can show people what well trained officers can actually do.”

Several of the graduates received awards for their performance during training:

Nicholas Wade received the Health and Physical Fitness Award, which is given to the officer who participates and excels in the Hard Rock Challenge and achieves the class’s best score in the Montana Physical Abilities Test.

Michael Murphy received the Paul Williams Award, which is given to the officer who provided inspiration to the staff and students through a display of unwavering dedication and determination. The award is given in memory of the late Chouteau County Sheriff Paul Williams.

Benjamin Graupmann received the Jack Wiseman Award, which is given to the officer selected by his/her peers as the most outstanding officer. The officers of each class select the recipient by considering two questions:

1) If you were a law enforcement agency administrator, who would you most want to hire?

2) If it were 2:00 a.m. and things were going bad quickly, who would you most want to know was coming to help you?

The award is given in tribute to Jack Wiseman, who served as a training officer and commander at the Montana Law Enforcement Academy for more than 22 years. Graupmann also received the Alex Mavity Award, which is given to the student who achieves the highest accumulated score on all academic and skills-based training. The award is given in honor of Billings Police Department Detective Alex Mavity, who was killed in the line of duty in 1989.

Brandon LaRocque received the Glenn Janes Award, which is given to the student in each class who demonstrates the highest level of proficiency in the Police Vehicle Operation Course. The award is given in honor of Montana Highway Patrol Trooper Glenn Janes, who served as a driving instructor at the Montana Law Enforcement Academy.

James Marvich received the Joe May Award, which is given to the officer who displays exceptional leadership and motivation. The award is given in honor of the late Joe May, one of the people credited with the conception and creation of the Montana Law Enforcement Academy.

Derrick Pawlikowski received the Josh Rutherford Award, which is given to the officer in each class who achieves the highest scores in defensive tactics. The award is given in memory of Blaine County Deputy Sheriff Josh Rutherford, who was a defensive tactics instructor with the Montana Law Enforcement Academy when he lost his life in the line of duty in 2003.

Brett Haux received the Hal Vogelsang Award, which is given to the officer who displays the highest degree of fidelity as determined by Academy staff. The recipient has demonstrated exceptional qualities of honor, pride, integrity, duty, loyalty, and service to not only the class, but the staff and entire profession. The award is given in honor of Hal Vogelsang, who served as an FBI special agent for more than 36 years, and as a training officer at the Montana Law Enforcement Academy for more than 25 years.

Kaelin Kiesel received the Allen Kimery Award, which is given in recognition of outstanding marksmanship and the class’s highest ranking in firearms training through marksmanship, safety, and tactical proficiency. The award is given in honor of Missoula County Sheriff Deputy Allen Kimery, who was killed in the line of duty in 1984.